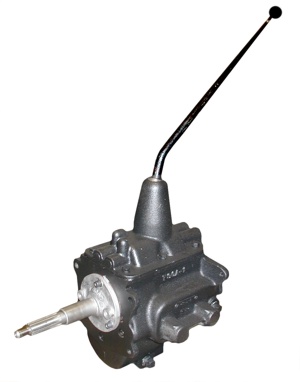 The Borg-Warner T90 transmission was one of the most common transmissions found in 1946 to 1971 Jeeps. Because of its long production span, it is nearly legendary. It is a good transmission when well maintained and has often been adapted to V8, V6 and I4 power.

The T90 was the improved progeny of the T84, of military MB & GPW fame. The T90 was the standard three-speed as found in CJ Universals, Utility Trucks & Wagons, J Series and Forward Control Trucks.

The T90 is a top loaded, top shifting or side shifting transmission.

The T90 is fully synchronized in the second and third gears. All gears are helically cut except first and reverse, which are spur gears. 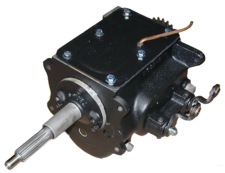 The T90 transmission is 9″ long and features a cast iron top cover that is retained by six bolts and a main case of cast iron. The case itself has a prominent bulge on the driver’s side with two protruding bosses as provisions for side-shifting actuators.

All 4wd T90 transmissions have a 1-3/8″ x 6 spline output shaft for mounting the transfer case input gear. A 2wd version of the T90 does exist and was installed in some Jeeps but is a rarity.

Jeeps also had a T86 transmission that appears similar to the T90. Many parts interchange, however first & reverse gears are helically cut in the T86 in lieu of the spur cut gears in the T90.

There are three major versions of the T90 to differentiate.

The T90 used from 1946 to 1962 with the L and F-head four-cylinder engines is designated as the T90A1. These versions all feature top shifters, a 7″ input shaft (stick-out length) with 15/16″ x 10 splines and a felt-sealed front bearing retainer assembly. The input shaft has an 18 tooth, helically cut input gear. The cluster gear has a 33 tooth driven gear, resulting in a 2.79:1 first gear and a 1.55:1 second gear.

The T90 used from 1963 to 1971 with the F-head four-cylinder engine is designated as the T90C. It features top shifters, a 7″ input shaft (stick-out length) with 15/16″ x 10 splines and a felt-sealed front bearing retainer assembly. Since the T90C uses a case marked “T90A”, you will need assurance that the transmission in question came from a post-’62 Jeep, or you will need to pull the top cover and count teeth. The T90C has a 16 tooth, helically cut input gear. The cluster gear has a 35 tooth driven gear, resulting in a 3.34:1 first gear and a 1.85:1 second gear.

The column shift T90J can be easily converted from column (or “transmission side shift”) to floor shift (“top shift”) by installing a floor shift top cover assembly.

The T90 features a conventional “H” shift pattern, with reverse being towards the driver and up.

The M38 and M38A1 Jeeps have basically the same T90 3 speed transmission as CJ’s but they have two plugs that screw into the front of the shifter cover rail bores that protrude far enough to hit the back face of some conversion applications. They may have to be modified and plugged as appropriate.

The Jeep T90 was factory-married to the Jeep Dana Spicer Model 18 transfer case, and only the small input bore versions.