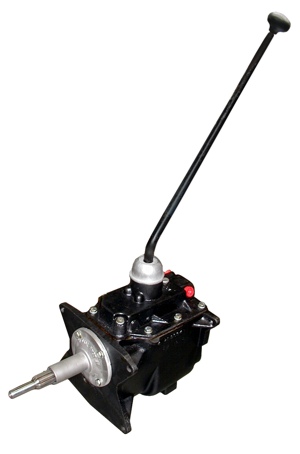 Rated at medium-duty, the T150 is stronger than its compact size may suggest. Though it only holds a candle to the truck style four-speeds’ strengths and capabilities, the T150 is frequently retained in CJ Jeeps when married to mild GM V6 and V8 power. It is regarded as the second strongest of all the Jeep three-speeds, second to the Jeep T15.

For the big-gears crowd, it is popularly replaced with the Ford T18 and Ford NP435 transmissions, since they share a similar bellhousing bolt pattern and compact installations.

The T150 is a top loaded, top shifting transmission. The T150 is fully synchronized in the second and third gears. All gears are helically cut.

The T150 transmission is 9″ long and features a cast iron top cover that is retained by eight bolts and a main case of cast iron.

The T150 features a conventional “H” shift pattern, with reverse being towards the driver and up.

The Jeep T150 was factory-married only to the Jeep Dana Spicer Model 20 transfer case.

Of interesting note, the T150 transmission was the subject of a recall in the late 1970’s, for its rear seal being installed backwards. This seal should face spring-side towards the front of the transmission.

It may be possible to bolt a T150 to a Jeep Dana 18 transfer case, but this transmission uses a uniquely machined transfer case input gear with a seal journal. This transfer case gear does not interchange with any Model 18.