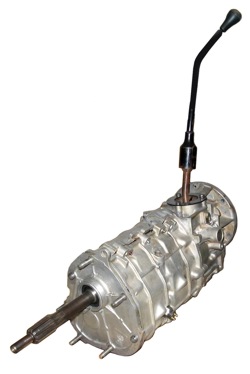 The Peugeot BA10/5 transmission is a five-speed, overdriven, light-duty, passenger car transmission used by AMC Jeep from 1987 until mid-1989 in the YJ Wrangler, XJ Cherokee and MJ Commanche with the AMC 258 & 4.0L I6.

The 10/5 transmission had a poor record for durability and service, and consequently had the distinction of being the transmission with the shortest production run in Jeep history. It was gradually replaced by the AX15 during the 1988 model year.

The BA10/5 as found in Jeeps is 16-7/8″ long. Its case is split longitudinally down the center. Its case and tailhousing are made of cast aluminum and its shift control is located in the rear portion of the transmission. The BA10/5 bellhousing mounting face has five mounting studs and two dowel pins for alignment.

In terms of identification numbers, it may have a “SIMI” and “3.283…” cast into the front and side of the case.

The BA10/5 is a laterally loaded and assembled transmission. It has an 1-1/8″, 10 spline input shaft. It will most likely feature 21 splines on its output shaft, though we have heard limited accounts of later units possibly having 23 splines.

The BA10/5 was only offered in Jeeps with the internal, integrated hydraulic slave cylinder throwout bearing, which were also notoriously problematic.